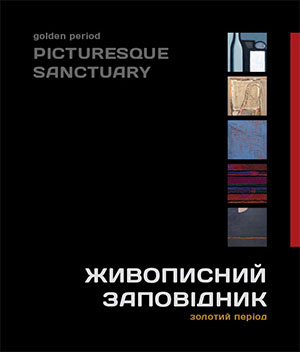 The exposition "Scenic Reserve. Golden Period "includes about 30 works of all major participants, created from 1990 to 1999.

This is the first exhibition of the association, which presents a section of landmark works of the 1990s, after the exhibition Landschaft "Scenic Reserve", which was held at the National Art Museum of Ukraine in 2002.

"The uniqueness of the exposition is that, firstly, many years later we managed to bring together the works of five geniuses of Ukrainian contemporary art during the dawn of the" Scenic Reserve ". Secondly, to present works that were never exhibited and for a long time were exclusively in private collections", says the curator of the exhibition and the expert on contemporary art of the auction house" Golden Section" Stanislav Skoryk.

"Scenic Reserve" was formed in 1991, but the basic ideas of the association appeared in the Sednevsky open air as early as the late 1980s. Their main program was "Neo-formalism", where the picture is presented by the authors not as a window to the world, but as a plane covered with a layer of paint. The main task of artists was to study the color, texture and shape in space.

The ideological inspirer of the association - Tiberiy Silvashi - acted as co-curator of this exhibition and participated in the formation of the exposition.

"We want to remind this exhibition about the most powerful Ukrainian association of artists, whose work today are the zest of many famous Ukrainian and foreign collections. This, without a doubt, is a significant cultural event for Ukrainian contemporary art," - co-owner of the auction house" Golden Section "Mikhail Vasilenko said.

Sunday is a day off.