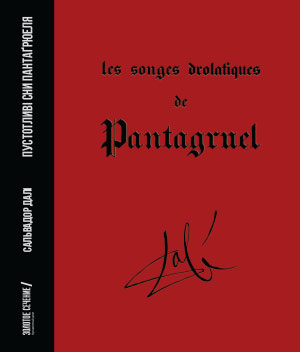 A gradual exit from quarantine will mark a significant event for the Ukrainian audience - an exhibition project by Les Songes drolatique de Pantagruel of Spanish artist Salvador Dali. The works are based on the novel "Gargantua and Pantagruel" by the French writer Francois Rabelais.

The exhibition of the brilliant surrealist will open on June 10 in the gallery of the Golden Section auction house (Kyiv, 4 Leonid Pervomaisky St.) and will run until June 26 inclusive.

For the first time in Ukraine, the organizers will present a complete, non-fragmented collection of 1973 prints of the most limited edition - 50 copies of Dali signed and numbered personally. Before the engravings were framed, they were stored in a special folder in the form of a medieval book, which will also be presented at the exhibition.

Pantagruel's Mischievous Dreams is a graphic series by Salvador Dali, in which elements of his works, written earlier, complement the engravings on human vices. The first version of such engravings was released by the publisher of the novel Richard Breton in the XVI century.

By the way, a similar complete portfolio, consisting of 25 Les songes drolatique de Pantagruel lithographs, each of which is signed in pencil, was sold at Sotheby's in 2008. Since then, the cost of prints from this series has grown significantly in price.

“The Ukrainian audience really missed the cultural events, the implementation of which was temporarily suspended due to quarantine. We are pleased to open the season with a truly special project of one of the world geniuses of Salvador Dali. The series has been repeatedly exhibited in many major cities around the world, and has also been successfully sold at auction at Sotheby's and Christie's,” says Mikhail Vasilenko, co-owner of the Golden Section auction house.

A catalog of the same name has been published for the project, which can be purchased at the Golden Section auction house.

In a pandemic, entry to the Pantagruel's Naughty Dreams exhibition will be partially limited - no more than 12 people can be in the room at a time. A prerequisite for visiting the exhibition is the presence of a mask.

Entrance to the exhibition is free.