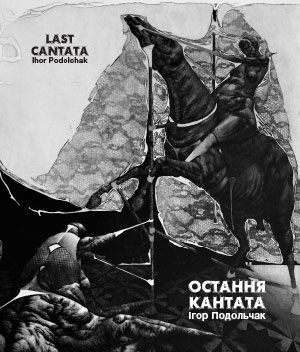 In Kiev, the schedule of Igor Podolchak will be shown, whose works were presented to Ukraine at the exhibition in open space.

The exposition will be decorated with 30 etchings created by the author in 1987-1996.

It should be noted that the easel graphics, which the artist has been engaged since 1981, became the beginning of a successful career of the artist. Combining the techniques of etching, engraving, aquatint, blind etching and dry needle in his works, Podolchak creates his own unique originality and creative personality.

In 1993, two Etchings of Podolchak, representing Ukraine, became part of the "Art in Space" project. They were exhibited at the first in the history of the art exhibition in space, which took place at the Russian orbital station "Mir".

The center of creativity of the artist is the human body in its various manifestations - in interaction with other bodies, in different states and stages of decomposition. In the artistic development of the theme of decomposition and deformity there are only two types of matter, two formations of the "flesh" - human and architectural.

"Metaphorism and allegory of images created by the author can be compared with the characters of the graphic works of the famous Francisco Goya, but in his own unique style Podolchak. The author's graphics are the achievements of the Lviv school, whose works are exhibited in the most famous institutions, including the PinchukArtCentre and Mystetskyi Arsenal," said Mikhail Vasilenko, co-owner of the Golden Sector Auction House.

The exhibition will last until July 28, the entrance for everyone is free.

About the author: Igor Podolchak (1962, Lviv) - Ukrainian director, screenwriter, producer, artist and curator of contemporary art. Member of the Ukrainian Film Academy. In 1984 he graduated from the Lviv National Academy of Arts, Faculty of Interior and Equipment. Together with Podolchak studied Oleg Tystol, Pavel Kerestey and Mykola Matsenko. From 1985 to 1986 he worked at the Art Foundation of the Union of Artists of Ukraine. Since 1986 and until this time he works as a free artist and curator of contemporary art. Participated in numerous international exhibitions around the world, winner of many of them, organized and held a number of international exhibitions in Ukraine and abroad. Co-founder of the Creative Association "Masoch Foundation" and co-author of all his artistic actions and projects. Lives and works in Kyiv and Lviv.