Michel Kikoїne (1892-1968) - French artist of Jewish descent, representative of the "Paris School". Born in Gomel. He studied at the Minsk Commercial School (since 1905) and attended the art school of J. Kruger (since 1904). He moved to the city of Vilna and enrolled in the Vilnius Drawing School (1909). He moved to Paris (1912) and settled in a commune home for artists "La Ruche". He was familiar with famous artists like Modigliani and Chagall; participated in the salons of the Independent (since 1914). He served in the French Army during World War II. In the post-war period, he actively participated in the activities of the Jewish community and in promoting the work of Russian immigrant artists; traveled to Spain, Italy, UK and Israel (1950s); participated in many solo and group exhibitions in France and abroad. The works of Mikhail Kikoin are in private and museum collections of France, USA, Japan, Israel, Belarus, Russia, and many other countries of the world. 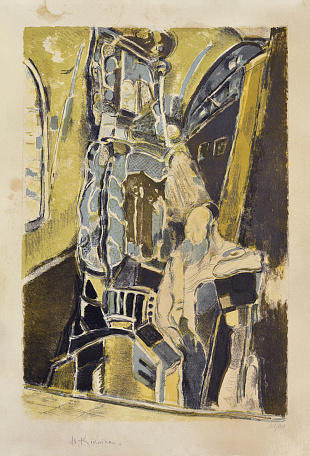