Sheet size: 66 x 50.5 cm
Imprint size: 58 x 43 cm
Publication: Directory-Reson S.Czwiklizter. Ossip Zadkine Catalog of l'oeuvre grave. - Paris, 1967, No. 88
Tsadkin Joseph (Yosel-Shmuille Aronovich) (1888-1967) - an outstanding sculptor and artist. Born in Vitebsk (Belarus). He studied at the First Vitebsk City Four-School School (1900-1904), the first two years - in one class with outstanding artist M. Chagall. He managed the joinery and turning craft. He took drawing lessons at the Vitebsk school-studio. By the decision of his father Zadkin was sent to study in England (1905). I worked at the evening courses at the Polytechnic School (1907), studying carving in the School of Arts and Crafts (1909). He moved from London to Paris to continue his studies. He entered the National Higher School of Fine Arts, where he studied under the direction of sculptor Jean-Antoine Inzhalber. Under the influence of communicating with poets began to write poems and prose. Presenting his sculptures at the Autumn Salon and the Salon of the Independents (1911). A participant in numerous personal and group exhibitions around the world. He worked in the field of easel art and monumental sculpture, engaged in graphics (drawings, etching, lithography, gouache). He taught at the workshops of the Grand Schomieres Academy. Laureate of numerous awards, including the Grand Prix in the area of ​​sculpture at the Venice Biennale (1950), the National Award of France in the field of art (1960), the Order of the Legion of Honor (1966). The works of the artist are presented in many museum and private collections from different countries of the world. A large collection of works is kept at the Tzadkin Museum in Paris. 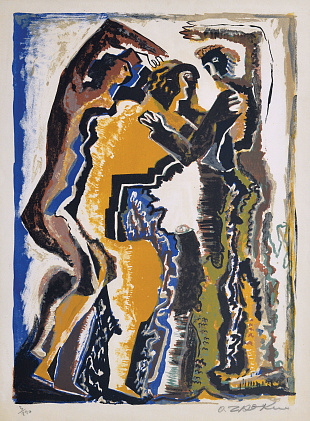