Paper, color lithography
31.5 x 24.5 cm
Signature "on lithographic stone" bottom right
Publication XXe Sèicle, No. 10, 1958
Dubuffet Jean (1901-1985) is a French artist and theoretician of art, the founder of the Ar Brut style. Born in Le Havre, a wealthy wine merchant's family. He studied at the Havrian Lyceum, later joined the School of Fine Arts in the same city (1916). Arriving in Paris (1918), he studied for six months at the Julian Academy and then began to work independently. The first exhibition of his works (1944) was held in the Parisian gallery R.Druen. Ultimately formed as a master by developing the technique of hautes pates ("rising dough"). He was close to surrealists (1946). Becoming the founder of Ar Brut - "rough" or "raw" art, fundamentally close to the amateur painting of children or self-taught, that does not recognize the generally accepted aesthetic norms and uses any improvised materials. Founded in Paris "Duubuffe Foundation" (1975). With the help of special exhibitions and publications, he began to select a historical and ethnographic background for his neoprimativism. In the 1960's, he became enthralled with the technique of spontaneously-unconscious drawing of ballpoint pens, calling these pictures non-translated neologism "hourloupe". In retrospect at the New York Museum S. Guggenheime (1973) presented his art on stage with the assistance of the Musical Theater "Cookie Bazaar": the dancers performed here among the pieces performed in the style of "hourloupe". Works by J. Duubuffe are presented at the largest museum collections in Paris, Berlin, New York, Rotterdam, in private collections and sold at leading auctions in the world. 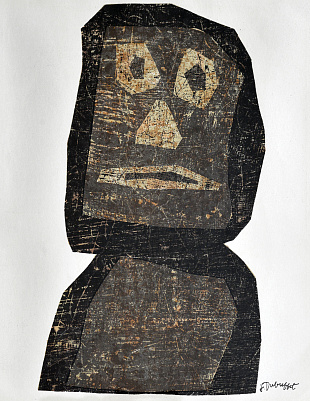