Volodymyr Makarenko (b. 1943) is a Ukrainian non-conformist artist. He studied at the Dnipropetrovsk Art College in the studio of Y. Kalashnik. The diploma thesis "In the Blue Land" was destroyed and the artist was accused of formalism and deprived of the opportunity to further study in Ukraine. He moved to Leningrad and entered the Higher School of Monumental Art. Mukhinoy (1963). He received his diploma in monumental painting (1969) and in the same year became a member of the informal organization of non-conformist artists known in the West as the St. Petersburg Group. He moved to Tallinn (1973) to meet and exhibit with local artists. Emigrated to Paris (1981); received the Silver Medal of the City of Paris for his works of art (1987). Conducted exhibitions in France, Germany, USA, Canada, Sweden; collaborates with European and American galleries. He lives and works in Paris. 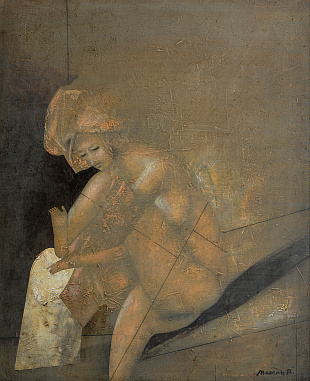