Roytburd Alexander (1961-2021) - Ukrainian painter, photographer, author of objects and installations, curator. One of the leaders of "Waves of Ukrainian transavantgarde." He graduated from art-graphic faculty of the Odessa Pedagogical Institute (1983). Member of the National Union of Artists of Ukraine (since 1989). Representative of South art school. One of the founders of Ukrainian postmodernism. Founder of the association "New Art" Odessa (1994). Chairman of the Soros Contemporary Art Center, Odessa (1997-1999). He lived and worked in New York (2000-2002). He was Director of Guelman Gallery in Kiev. A participant of the 49th Venice Biennale. He lives and works in Kyiv and Odessa. Director of Odessa Art Museum (from 2018). His works are kept in MoMA (New York), State Tretyakov Gallery (Moscow),State Russian Museum (St. Petersburg), PinchukArtCentre (Kyiv), Odessa Art Museum (Odessa) and private collections around the world. 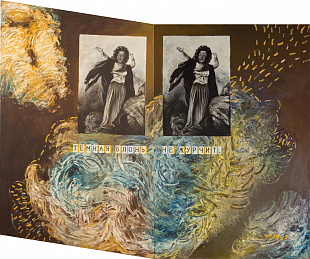