Natalia Goncharova (1881-1962) - Russian painter-avanhardystka. Made a significant contribution to the development of avant-garde art world. Born near the city. Tula. She studied at the Moscow School of Painting, Sculpture and Architecture (1899-1902). Initially, the sculpture department at P.Trubetskoho and then painting in the class K. Korovin. She took an active part in organizing exhibitions of Russian Futurists - "Jack of Diamonds", "Penguin tail", "target" and others. Particularly noteworthy lithographic illustrations that Goncharov made to Futurist poetry. Goncharov one of the first among European artists used in the design of the book collage technique. Before the Revolution, she began working as a theater artist. In the famous Diaghilev entreprise S. (1914) it issued the play "The Golden Cockerel" to music by Rimsky-Korsakov. Later, accepting the invitation of Diaghilev artist working for Russian Seasons, Goncharova and her husband arrived in Paris (1915), where he has remained until his death. Goncharova's last work is considered to be issued in 1957 Festival in Monte Carlo, dedicated to the 15th anniversary of the death of the famous Mikhail Fokine, whose ballet of its time and helped to open up to her as an artist, stage designer. 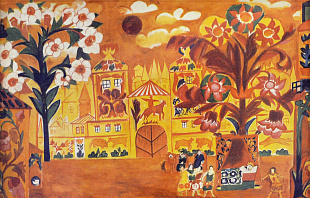