Paper, lithography (imprint from the lithography of 1961)
Paper Size: 38.5 x 32 cm
Imprint size: 24.5 x 18.5 cm
Embossed signature bottom right, pencil copies left
Imprinted seal of printing certification and S.P.A.D.E.M (Paris) publishing house at the bottom in the center
Marc CHAGALL (1887-1985) - one of the leaders of the world and most famous avant-garde artists of the twentieth century. Born in the city. Vitebsk, Belarus. He studied at the Vitebsk Art School Yu Peng (1906); OPH Art School in St. Petersburg (1907-1908); School drawing E. Zvantsevoyi Dobuzhinsky M. and L. Bakst (1908-1909); Private studies in Paris (1910-1914). Exhibitions "World of Art" (1912), "Salon Independent" (1912-1914), the group "Jack of Diamonds" (1916) and many others. He lived and worked in Vitebsk (1915), Moscow (1920), worked in the Jewish Chamber Theater, took an active part in the Art section Cultural League in Berlin (1922), where he mastered the technique of printmaking, Paris (1923-1941 ), which created a large number of book illustrations, including the Bible, in the USA (since 1941), where he resumed work for the theater and has mastered the technique of color lithography in France (1948). He worked mainly as a muralist and graphic artist, worked as ceramics, sculpture, stained glass, mosaic, wallpapers and published several collections of poetry. His exhibitions were held in major galleries and exhibition halls in the world. Marc Chagall Museum in Vitebsk open and Nice. Works are almost all the major art museums of the world, many regional museums and private collections in the most famous. 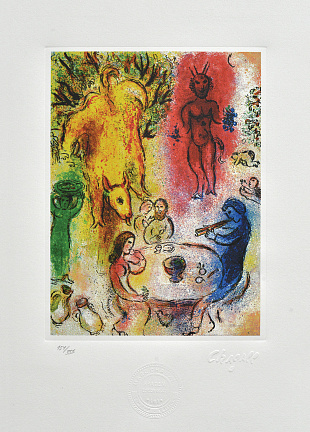