Paper Arches, color lithograph (by painting)
Sheet size: 75 x 54 cm
Imprint size: 71 x 44 cm
Embossed seals of Atelier Mourlot Paris, State Russian Museum and Galerie Gerald Piltzer
Print: Murlot, Paris (France), 1992
Malevich Kazimir Severinovich (1879-1935) - Ukrainian avant-garde artist, prominent figure of the Ukrainian avant-garde, founder of Suprematism, one of the founders of cubofuturizm; teacher, art theorist. Born in Kiev in the Ukrainian-Polish family. His father was an engineer of sugar production, so the family often moved from one town to another. He lived in Podillia (Myevka), Kharkiv oblast (Parkhomivka, 1890-1894, Bilopilia), Chernihiv region (Vovchok, Konotop). He studied at M. Pymonenko at the Kiev Art School (1895-1897). In 1904 he moved to Moscow. He perfected his skills at the School of Painting, Sculpture and Architecture (1904-1905) and in the studio of F. Rerberg (1905-1910). In the paintings of the first period of creativity, he tried to combine the principles of Cubism, Futurism and Expressionism. Participated in the exhibitions of the artists' associations "The Diamond Jute" (1910) and "The Tie Tail" (1912), in which he exhibited his works, written in neoprimitivist style and cubo-futurist style. Became one of the founders of abstract art. He initiated a new modernist trend in art - Suprematism (1915). On December 7, 1915, for the first time, he published a painting "The Black Square on a White Background", which turned into an icon of abstract art. He published the magazine Supremus (1916). He was a member of the "Society of the Heads of the Earth". He taught at the Vitebsk Art School (1919-1922). He was director of the Institute of artistic culture in Leningrad (1923-1927). Moved to Kiev (1927), where M. Skrypnyk's efforts to create normal conditions for creativity. He published articles on artistic subjects in the journal "New Generation" (1928-1929). He taught at the Kiev Art Institute (1927-1930), where at that time F. Krichevsky, M. Boychuk, V. Palmov, V. Meller, O. Bogomazov and others worked. The beginning of repression in Ukraine against the intelligentsia forced Malevich to return to Leningrad again. I was about to move to Europe. In 1930 he was arrested on charges of "a German spy". The artist died in Leningrad, buried near Moscow. 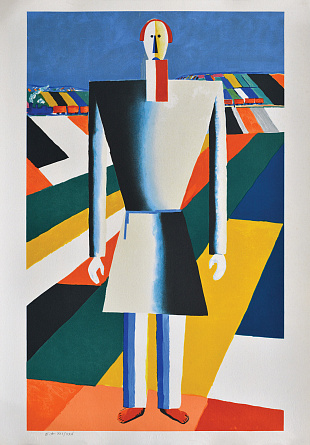