Edgar Degas (1834-1917) is a French painter and impressionist. Parent - Parisian banker Pierre Auguste de Ga, mother - Selestan Musson. Already at the age of 18 he arranged a studio in his father's house. After studying at the College of Louie-le-Gran (1853), he began studying jurisprudence at the Sorbonne. Began to be interested in the painting of the old masters in the Louvre. After a year at Sorbonne, he left law and began studying painting by artist Louis Lamothe. Visiting the School of Fine Arts (École des Beaux-Arts, 1855-1856), where he met a French painter and graphic artist Jean Auguste Dominique Ingres, from whom he received an important creative stimulus. For the next three years, he lived with relatives in Italy - in Florence and Naples. During his stay in Rome, he worked as an artist in the Medici villa and studied the art of the old Italian masters of the 15th-16th centuries. In the early period of his work, Degas wrote paintings on historical themes, realistic portraits, marked by the expressiveness and subtlety of the picture. In the 60s, he acquaints himself with Mana, who, in turn, introduces the artist into the circle of Impressionists. Manet's work impressed Edgar with his distinction from classical academic work by other artists. Since 1873 he joined Impressionism and became one of the most characteristic of his representatives. Many paintings by Degas devoted to the ballet ("Blue dancers"), horse racing ("Horse racing") and routine scenes from Parisian life. The works of Dega are marked by a sharply expressive pattern, a masterful composition, exquisitely durable color. 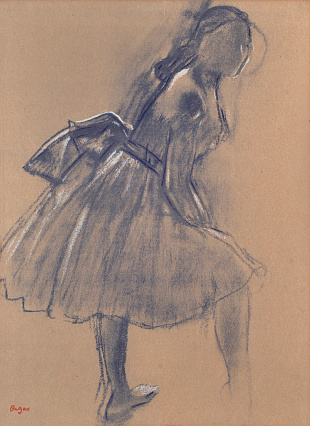