Paper, color lithography Sheet size: 18.4 x 14.3 cm Special Limited Proof Edition Date "on the lithographic stone" bottom right, pencil copies left Mintage: No. 2/10
Keith Haring (1958-1990) is an American artist, sculptor and public figure. Born in Pennsylvania, USA. Early on, I began to draw on the American popular comic book culture. He studied for two semesters at a designer at Pittsburgh Art School, later dropping classes. Moved to New York and entered the circle of alternative art. He was engaged in wall painting in the New York Metro, as well as in Melbourne, Sydney, Rio de Janeiro, Amsterdam, Paris, Berlin. He was friends with Jean-Michel Bascias, Andy Warhol and Madonna, and collaborated with Yoko Ono and Grace Jones. The first personal exhibition of Keith Haring was organized in New York (1982). Participated in the 7th Document (1982), the Biennial in Sao Paulo and other major international exhibitions. In 1988, he received an AIDS diagnosis and launched an active campaigning against the silencing of AIDS patients. The risk of this illness becomes one of the constant themes in his work. In 1989, he founded the Keith Haring Foundation to assist children's organizations and AIDS patients, up to the present day. In 2008, in connection with the 50th anniversary of Harring, his retrospective exhibitions were held in Terrace (Spain), Lyon (France), Budapest (Hungary) and other countries. 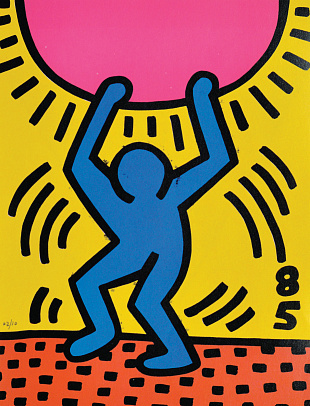