Paper, color lithography Sheet size: 38 x 28 cm Print: Mourlot, Paris (France) Publisher: DLM 212, Maeght, Paris (France)
Alexander Calder (1898-1976) is an American sculptor, born in Pennsylvania (USA). Gained world-wide popularity thanks to its bizarre figures from wire and mobiles - kinetic sculptures that are driven by electricity or wind. Sculpture was engaged in childhood; moving his father from city to city, always had his "workshop" along with his father's child. In the 1920s he worked as an artist in a newspaper, designer of circus performances. Studied at the Stevens Institute of Technology (1915 - 1919), having received a diploma in mechanical engineering. He attended evening painting courses (1922), went to the Art Students Ligue (1923) in New York. In 1926 he moved to Paris, where he was friends with surrealists and constructivists. At the same time it finds a new form of sculpture - figurines from the wire. Subsequently, he approached the avant-garde circles (Miro, Cocto, Mondrian, Leger, etc.). In 1931 he joined the group of non-figurativists. Since the 1950s, Calder was mainly engaged in monumental sculptures. In 1952, Calder received a great prize at the Venice Biennale. He died of a heart attack after opening his great retrospective exhibition at the New York Museum of Whitney. 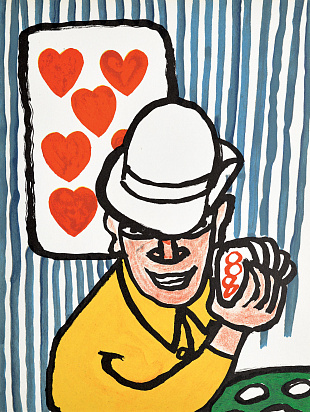