Paper, photolithography (pictured) Sheet size: 22.5 x 26 cm Imprint size: 18 x 22 cm Signature "on lithographic stone" bottom left
Pierre-Auguste Renoir (1841-1919) is a French painter, graphic artist and sculptor, a representative of French impressionism, who later departed from this artistic trend. Born in Limoges, was the sixth child in the family. In 1844, the family moved to Paris, where the teenager Renoir settled in the church choir. At the age of 13, Renoir assisted the family, settling down for a master who learned to paint porcelain plates with flowers. Subsequently painted screens, curtains, cabinets. In the evenings, he attended a painting school. The lack of good education was offset by copying the paintings of the Louvre, which also sold. In his work Renoir depicted his everyday life - the scene he saw in the park, the cafe, on the street, on the river bank, and so on. Renoir is a Knight and an Officer of the Legion of Honor for his achievements in painting (1900, 1911). The most expensive picture of Renoir was the work of "The Ball in Moulin de la Galette", which was sold at the Sothbey's auction for $ 78 million (one of the most expensive selling Sothbey's for the entire history of the auction house). 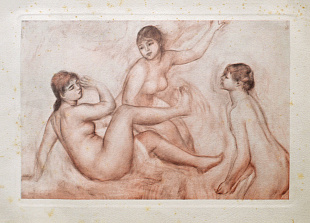