Sheet size: 47 x 58.5 cm Image size: 29 x 40 cm Signature and date on the metal plate top right On the back of the seal: Wenzel Hablik Nachlass (Wencel Hablik Heritage)
Wenzel August Hablik (1881-1934) is a German artist and expressionist and graphic artist, architect, designer. Hablik was born in Brücke (now the bridge town in the Czech Republic). Later he moved to Itceho (Germany) in 1907, where he was engaged in architectural and interior projects. Halbik created projects of furniture, textiles, tapestries and jewelry. However, Halik became famous for his etchings and painting, his connections with the great German expressionists. In 1909 Halbik published his "Schaffende Kräfte" - a portfolio of 20 engravings depicting a journey through the imaginary universe of crystalline structures, this series is considered to be the most significant achievement in his career, and later published other series of etchings. A trip to South America (1925-1926) inspired him to create paintings from the flora of those countries. In the directory-resonant of the artist presented about 600 works. Already after the death of Halbik, in 1995, the Museum of Wencesel Hablik was founded in the city of Itszeho. The museum contains a large part of his works, as well as his own collections of crystals and minerals. 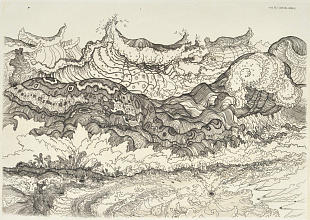