Emil Hirshfeld (1867-1922) - Ukrainian and French artist. Born in Odessa. He studied at the Odessa Art School (in the early 1880s); at the Academy of Arts in Munich. Later he moved to Paris, where he worked in the studio of V. Bouguereau, with J. Lefebvre and T. Robert - well-known salon painters and educators. A regular and successful participant in the Paris Salons (since 1892), his participation was marked by official awards and favorable reviews by critics. He was awarded the Legion of Honor (1910). The artist's personal exhibition took place in Paris (1914). He spent most of his life in Brittany, in the seaside town of Concarneau, which led to his becoming a mariner. He participated in the Spring Exhibition organized by local artists S. Chisinau, J. Brodsky and I. Paolina. Member of the Society of South Russian Artists (since 1901), participant of exhibitions of the Society (1901-1902). He died in Concarneau (France). 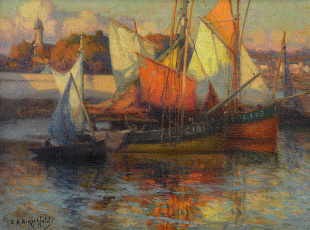