MARCHUK Ivan (1936)all works of the author

Marchuk Ivan (born in 1936) - Ukrainian painter. He graduated from Lviv School of Applied Arts named after I. Trush (1956), Lviv State Institute of Applied and Decorative Arts named after R. Selsky (1965). Member of the National Union of Artists of Ukraine (1988). Honored Artist of Ukraine (1996). Laureate of the National award of Ukraine named after T. Shevchenko (1997). People's Artist of Ukraine (2002). Member of the Golden Guild of the International Academy of Contemporary Art in Rome. According to the British edition of The Daily Telegraph, Ivan Marchuk appeared among the 100 most prominent figures of our time. He has held more than 150 solo and 50 group exhibitions in Ukraine and abroad (since 1979). The works are stored in museums on five continents. He received an award from the President of Ukraine «National Legend of Ukraine» (2021). On June 12, 2021, the President of Ukraine V. Zelensky signed the Decree «On the establishment of the museum and cultural center of contemporary art of Ivan Marchuk». 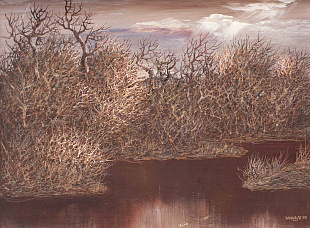