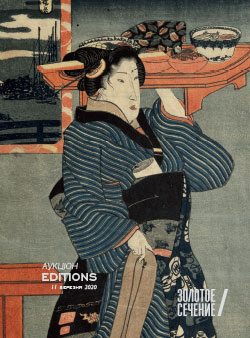 A week before the auction, March 5-10, there will be a pre-auction exhibition EDITIONS, where anyone can view and enjoy the works of various drawing techniques (engraving, lithography, etching, linoleum, monotype and others), created by great world masters, as well as Ukrainian artists. , or compete with other bidders during a silent auction and bid on your preferred lot.

Admission to the exhibition is free.

Entry for the final auction on March 11 is for registered participants only. Registration for participation in the auction takes place during the exhibition in the showroom.

This auction will feature around 70 works by world-class artists and renowned national authors. Among the lots worth mentioning are several lithographs of famous Japanese charts of the 19th century, and especially the Waitress with a Tray of 1834 by Utagawa Kunyoshi.

In the presented collection it is necessary to pay attention to the life-long lithograph of Vasily Kandinsky's "Evening", a limited edition of which the artist made for his friend, Bulgarian poet and publicist, Geo Milev - as an addition to his avant-garde journal "Teresa". Equally interesting are the colorful engravings of Salvador Dali's "Knights' Competition", which was part of the Life in a Dream portfolio, published in Barcelona in 1975, and Francisco Goy's 1877 imprint.

The most expensive auction item is a lithograph from Tamara Lempitskaya's Adam and Eve series from the 1994 limited edition. Of particular interest to collectors and art connoisseurs alike are the great color lithographs of Jackson Pollock's Summertime 9A, Roy Lichtenstein's Roommates and Elijah Bolotovsky's Plate III. No less collectible interest is the exact copy of 1607 made by Johannes Wiriks from an engraving by Albrecht Durer "Melancholy I".

Together with the circulation works of famous European and American artists, the collection included works by well-known Ukrainian artists, from the end of the XIX century to the present - Konstantin Trutovsky, Mykola Glushchenko, Leopold Levitsky, Alexander Sukholit, Sergey Geta, Tiberko Marilyn Silva , Roman Minin and others.

Among the rare lots in this block should be noted the works of the 1970s - "Cossack Bandurist" by Michael Deregus and "Still Life with Fish" by Michael Shemyakin.

Circulation art is becoming more and more popular, especially among new collectors, as it enables the acquisition of works by both world-renowned masters of past centuries and young domestic artists. At this auction you can easily taste the taste of the auction and plunge into an interesting and endless world of collecting, thus expanding your cultural experience, because the average cost of the auction - $ 100-700.