An exact copy of an engraving by Konstantin Trutovsky,
made in 1862 by Russian artist Vasily Timm
Paper, color lithography
Leaf size: 35 x 49 cm
Imprint size: 31 x 46 cm
Signed "on stone" from bottom right
Trutovsky Konstantin (1826-1893) - Ukrainian artist and graphic artist. He was brought up in a family estate in the village. Popov in the Kharkiv region. After four years of studying in a private boarding house, he enters the Mykolaiv Engineering School in St. Petersburg (1839), where he is a friend of F. Dostoevsky, a student of the same educational institution. Dostoevsky draws Trutovsky's attention to the works of M. Gogol, and the young artist, away from his homeland, feels himself a Ukrainian, acquaints himself personally with the younger then T. Shevchenko, and, along with Dostoevsky, enters the revolutionary circle of the so-called "Petrashevists". Only an accident saves him from arrest. Studied at the St. Petersburg Academy of Arts (1845-1849). Academician AM (1860). Belongs to the dominant floor in the II. 19 centuries realistic-academic direction. Having finished AM returns to Ukraine. The purpose of his art Trutovsky considers the image of the ordinary life of the Ukrainian peasantry. In addition to the scenes of Ukrainian life, he depicted the types and customs of small landowners.

Timm Vasily (1820-1895) is a Russian painter and graphic artist. He was born in Riga in a family of Ostzi Germans. He received his initial art education in his hometown, after which he attended the classes of the Imperial Academy in St. Petersburg (1839), where his chief mentor was A. Sauerweid. After graduation he moved to Paris, where he worked under the direction of O. Verne. He traveled to Algeria, after which he exhibited his battles at the Paris Salons. After returning to St. Petersburg (1849), he participated in campaigns to the Caucasus and Crimea. Academician of the Imperial Academy (1855). He directed the publication of the Russian Art Letter (1851-1862). Some time after the termination of the publication of the Russian Art Letter, he moved to Germany, where he had his own ceramic production in Berlin. 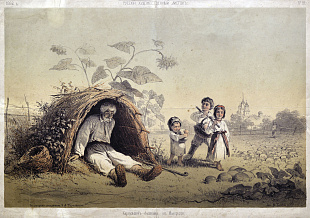