Yakutovich Sergey (р. 1952)all works of the author

Yakutovich Sergey Georgievich (born 1952) - Ukrainian artist, graphic artist, book illustrator. Son of graphic artist George Yakutovich. Graduated from the KDIH in the specialty "artist-graphic" (1977). Postgraduate student of creative workshops at the Academy of Arts of the USSR (Kyiv, 1977-1981). He worked as the main artist of the film Y. Il'ienko "Prayer for Hetman Mazepa" (2000-2002). He was involved as a painter in the film V. Bortka "Taras Bulba" (2005-2007). He worked on a number of TV films: "Even as we were Cossacks", "The Last Hetman", "Lost Paradise" (by M. Gogol). He actively collaborated with publishing houses of Ukraine, Russia as an author of illustrations to the works of world and national literature (since 1976). Laureate of the Lenin Komsomol Prize (1981). Honored Artist of the USSR (1986). Grand Prix winner at the Berlin-based exhibition "For Peace" (1983). Special Prize at the Triennale of Arts "Against Fascism" in Maydanek (Poland, 1985). Berliner Honorary Award in Berlin (1985). Gold Medal of the Academy of Arts of the USSR (1990). Gold Medal of the AM of Ukraine (2003). National premium of Ukraine to them. Taras Shevchenko for a series of graphic works. Honored Artist of Ukraine. Laureate of the National Prize of Ukraine to them. T. Shevchenko Member of the NSCU. Corresponding Member of the AM of Ukraine. 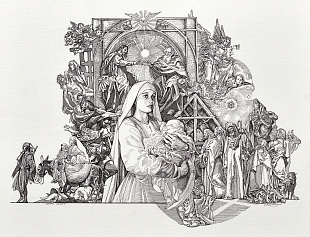