Paper, color lithography 72.5 x 104.5 cm Author's signature and circulation with a pencil bottom left Circulation: №159 / 250
Noyer Philippe Henri (1917-1985) - French painter, graphic artist, lithographer. Born in. Lyon, France. He studied at art school in Lyon. Moved to Paris where he continued his studies in the school of one of the most famous artists Colin P. advertising posters. The artistic career began after meeting with art dealer David E. (1943). The first solo exhibition at Drouant-David Gallery was a great success (1947). The exhibition at the CSHA (1949) all the paintings acquired president of XX Century Fox R. Goldstein and name of the master was known in the CSHA. He was one of the most popular portrait painters of Paris, London and the US executed portraits E. Taylor, D. Shore, J. Wallace et al. Later, the artist drew the attention of the art of lithography, in which he achieved the highest professionalism. Her works are in museums and private collections in France, CSHA and other countries. 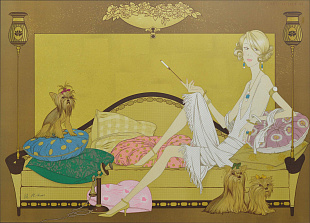