Paper, colored etching
Sheet size: 38.5 x 51.3 cm
Imprint size: 23.5 x 33.2 cm
Author's signature and date bottom right in pencil
Hermann Teuber (1894-1985) is a German artist, graphic artist, and educator. Born in Dresden. He studied Dresden School of Applied Arts (1919). Studied at a pedagogical college in Baucen (1908-1914). While studying, I was painting myself. He entered the Royal Saxon School of Applied Arts (1919), where he studied painting under the guidance of G. Ehrler. Subsequently moved to Berlin and became a student at the Berlin School of Arts (1922). He graduated from training and was awarded the prize of the Prussian Ministry of Culture (1926). He received the award of Albrecht Durer for his success in engraving (1931). He headed his own art studio and was a member of the Association of German Artists (1930-1935). In the late 1930s, his works, like most other artists, were classified as "degenerative art" by the Nazi regime, removed from the museums and destroyed. Was mobilized (1944), was captured (1945). After his release, he returned to Kalkar city; painting and drawing lessons. In the city of Kranenburg there was the first post-war exhibition of G.Toyber (1948). He was appointed professor of graphic arts at the College of Arts in Berlin (1950). During this time, German Toyer focused on color lithography, receiving many awards for his graphic works. He became an honorary member of the Bavarian Academy of Fine Arts (1966). The East German artistic guild awarded Toiber a laureate of the Corinthian Prize (1977). 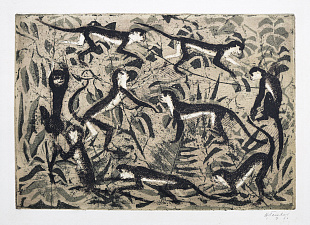